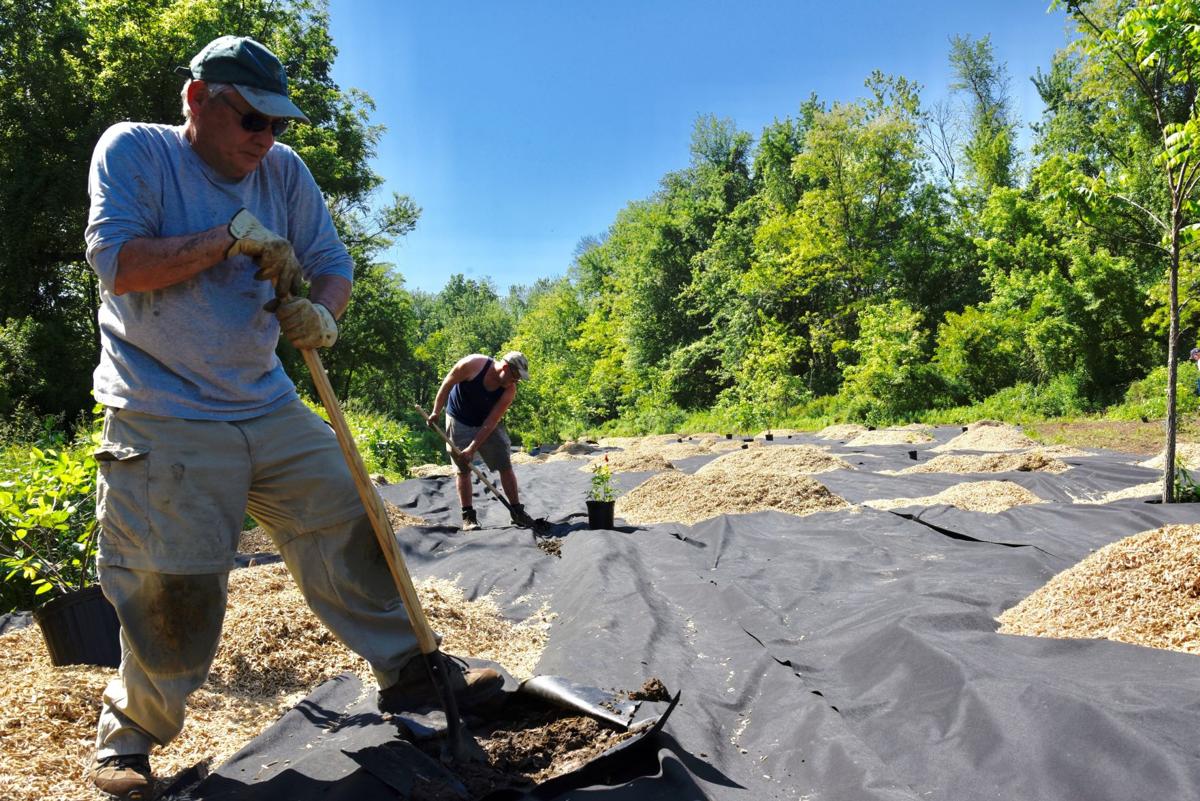 People using the popular Northwest Lancaster County River Trail soon will be able to gnosh as they enter a clearing in the woods near the northern terminus of the pathway.

Most everything in a 5-acre field beside the trail and Susquehanna River in the newly planted Falmouth Forest Garden will be edible: berries, nuts and leaves.

It’s believed to be the first forest garden in Pennsylvania.

An equally transformational land-use is occurring in the southern end of the county where the ballfields, picnic areas and pavilions of the former Holtwood Park have been removed and replaced by wildflowers and meadow grasses to become the Pollinator Park at Kellys Run Nature Preserve.

It may be the first park in the state exclusively dedicated to habitat for pollinating birds, bees and wildlife on public land.

Both projects represent new and creative land uses by the Lancaster County Conservancy, a group most known for its protection of the county’s special natural areas.

When the conservancy purchased 21 acres of floodplain along the Northwest Lancaster County River Trail and the Susquehanna at auction in 2016, the newly created Conoy Wetlands Nature Preserve included a former farm field where invasive plants had taken over.

The conservancy wanted to restore the floodplain forest that was once there. In the process, why not add an edible forest garden along the trail to add what conservancy stewardship director Brandon Tennis calls “curb appeal.

“Everything planted is native, perennial and edible to some degree,” Tennis says. “We want people to be able to experience this. We want people to become inspired by it and maybe plant the ones they are finding on the site and put them on their own properties, especially if it is riparian areas.”

The invasive, nonnative multiflora rose and autumn olive that had consumed the tract have been ripped out by tractors.

Volunteers and friends of the conservancy have been inserting 270 trees and shrubs purchased with money from the Rotary Club of Lancaster, 500 plugs of pollinator flowers as well as 50 pounds of Jerusalem artichokes. The latter will not be allowed to be harvested.

The project was made possible by a $31,600 grant from the Lancaster County Community Foundation.

To add color, pollinator plants like New England aster will be added, as well as mountain mint, which can be used for tea.

The public is invited to wander off the trail and sample the natural delights for personal use. Harvesting for commercial sale is prohibited.

Naturally, wildlife in the area is expected to help themselves.

Among those volunteers digging and planting on a recent afternoon was Joni Hauck, 61, of East Hempfield Township.

Hauck, who bikes on the trail regularly, has never had a pawpaw and looks forward to coming back to sink her teeth into one in a year or so.

“There’s too many times you see a tree being cut down, so anytime you see more planted, the better,” she says of the project.

For some 75 years, Holtwood Park served as an outdoors gathering place and recreational center for the community.

But Talen Energy, then owner of the Holtwood Dam, abruptly closed the park in 2016, setting off a public outcry.

Talen gave the park to the Lancaster County Conservancy, which, not in the park business, offered it to Martic Township. When the township declined to take it over, the conservancy said it would remove the structures and ballfields and let the land return to nature.

But then two beekeepers approached the conservancy with an even better idea.

Why not make the former park a concentration of colorful plants to aid all kinds of pollinators, from bees to birds to butterflies, suggested Joe Fields and Jonathan Smucker, who each live within a mile of the park and jointly own Smucker’s Fields of Honey, an apiary.

The business partners are transforming the former park into a garden meadow with a public observation trail winding through it.

“Something like a meadow is a transition that will help some people get over the fact that the park is converting back to the wild,” Tennis says. “But it’s converting in a way that’s more aesthetic and has a softer edge to it

“Meadows are a disappearing landscape. It takes a lot of work to keep in a meadow.”

The only pavilion remaining in the former park will be used as an educational classroom.

On another nearby field, part of the conservancy’s Kellys Run Nature Preserve, a cornfield has been planted with 1,400 plugs of native plants that will serve as a source of seeds that the conservancy can collect and convert other of its lands to open meadow environments.

To enhance its role as a multi-functional landscape, three acres in the rear of the cornfield are being seeded with a wildflower mix just to provide food for the area’s wildlife, such as deer, turkeys and maybe even quail being reintroduced.

On yet a third field, Fields and Smucker will be planting a showy meadow mix of wildflowers.

In return for this time and expense, they will be allowed to set up beehives for their honey business in one of the fields.

The preserve also will be the setting for a potentially far-reaching pilot project involving vegetation of utility corridors.

PPL is allowing the conservancy, in the spring of 2020, to plant low-growing pollinator plants such as goldenrod in 8 miles of power line corridors.

Currently, power line rights of way are mown every four years and sprayed with fungicide one year. Invasive plants move in readily.

Tennis and conservancy officials are hopeful they can prove the value of letting native pollinator plants fill the void. Mowing equipment can pass over them.

“This could change the whole ballgame as far as utility corridors are managed. It would save time and money and chemicals, and it’s all wildlife and pollinator habitat. Most importantly, they act as functional travel corridors for wildlife.”

Article and images were created by LNP Media Group and may be subject to copyright. They are used here with written permission from the author.